Abstract: This blog is a statement of problem – nothing more, nothing less. Those of you in search of narrative or fully-fleshed out ideas, I pray you will seek refuge elsewhere. To the intrepid truth-seeker, venture forth with care. Today you will be subjected to a collection of anecdotes loosely connected by my long-standing love of the band known as Talking Heads. Throughout this post, we will discuss the notion of growing older, graduating college, and wrestling with the ultimate purpose of life and art. Buckle up. 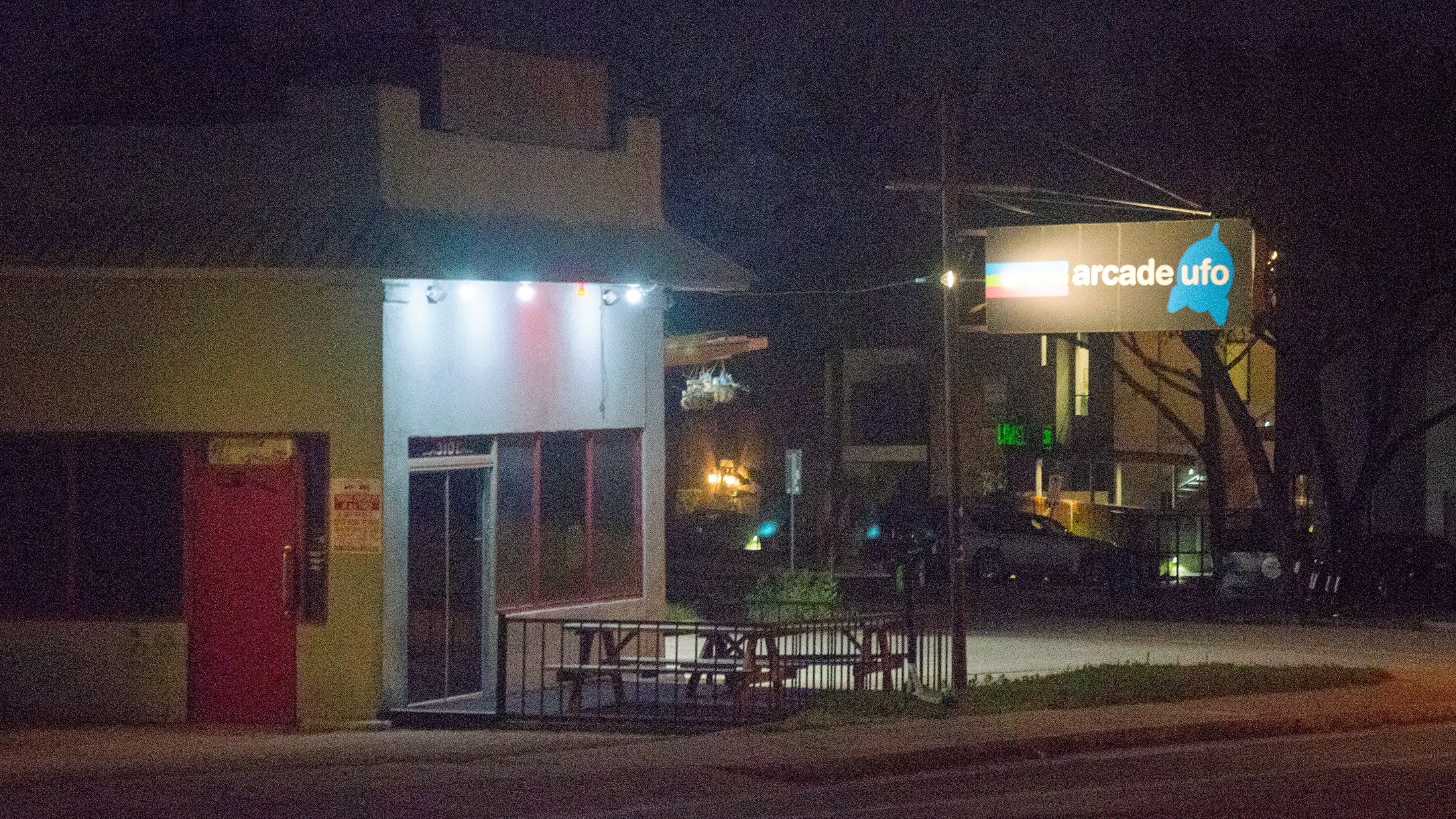 One of my earliest childhood memories is permeated by Talking Heads.

In this memory, I sit in front of a pine-wood credenza, a television laying atop. But the images on the screen are not of interest to me. I am in aural bliss. Talking Heads' best-known song, "Psycho Killer" is puncuating the room from a set of speakers, whose physical presence and location evades me.

As a child, I didn't know what "Psycho Killer" was about. But I knew it was scary, and I knew I liked it.

In front of that pine-wood credenza, one line from the song repeats in my head: "Psycho Killer, keskesay."

The last word rushes out of the speakers like the crash of a ride cymbal when the pedal is depressed.

As a child, I didn't know French. And I didn't know that the lyrics were actually "qu'est-ce que c'est" – meaning "what is this?"

I still sing it "keskesay." It sounds better to my American ears.

A little over a decade later, I bought tickets to Austin City Limits, the best Texas music festival south of Dallas and North of Houston. Although I knew and cared for few of the bands, I figured I would find some new music. It also didn't hurt that my friend Stephen was going to be there.

I arrived Friday morning for the first of three days that would be defined by copious amounts of standing around, listening to music, and people-watching – in that order. By the early afternoon, I was thoroughly disoriented. The throngs of people competed with the musicians for my attention.

I looked at the set-list. I didn't know any of the artists playing in this timeslot. Before I could ask Stephen, "where should we head next?"

He answered, "We're gonna go see David Byrne." I didn't know who David Byrne was, but the tone of Stephen's voice told me that his decision was made, irrespective of whether I was going to join him at the American Express Stage. I didn't have any better options, so I came along.

To the more astute readers in the crowd, or at least those over the age of 22, you probably know where this story is going. To those who haven't yet put the arc together, don't worry. I was in your place less than six months ago.

While I was listening to David Byrne sing and gallavant across the stage at ACL. Listening to the music of David Byrne and his ensemble was like mainlining nostalgia. My childhood memories floated around my cognitive space more densely than the throngs of concertgoers surrounded me in physical space.

Once Byrne and company left the stage, I was struck by two main takeaways. One, he didn't play "Psycho Killer, keskecay." Atlhough this set-list omission was more than dissapointing. It was not show-ruining. Two, he frequently sings about homes, houses, and sense of place – perhaps more than any other artist I have ever had the pleasure to listen to. Looking at Talking Head's top ten songs on Spotify, this is readily apparent: 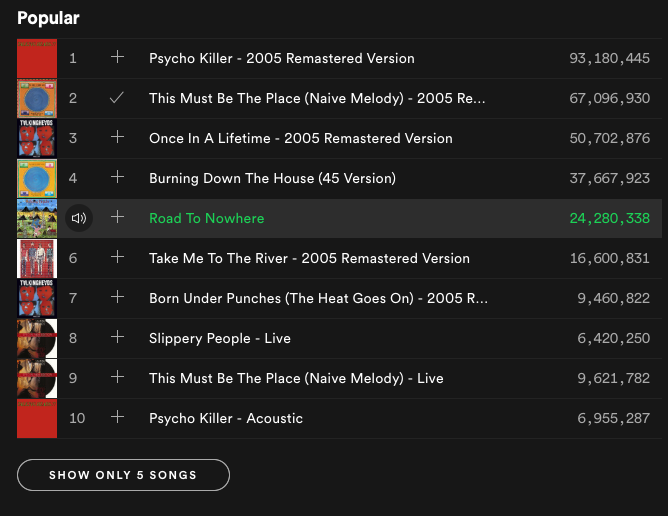 Of the top ten songs, at least half of them are clearly about different places, real or imagined. Of course, "This Must Be The Place (Naive Melody)" is a clear example of this phenomenon, but "Burning Down The House," "Road to Nowhere," and "Take Me to The River" also lend credence to my observation. Considering that two of the top ten songs are repeated, this leaves us with eight unique songs. A full five-eighths of their top songs are about place! Their albums "Songs about Buildings and Food" and "More Songs about Buildings and Food" are also clear indications of their reverence for place.

Don't worry, I won't make any more references to Doreen Massey, I already made those references in my last post. Regardless of my inclinations to rant about relational sense of place, my experience at ACL led me to fall back in love with Talking Heads music.

I'm usually not someone to feel uber-connected to music. I usually listen to music for the sense of pleasure that its melodies provide, not for any deeper meanings. Nevertheless, I found the raw energy and ever-present uncertainty of Byrne's music to be oddly comforting. In particular, the lyrics of "This Must Be The Place" felt unsettling prescient.

Home is where I want to be
But I guess I'm already there
I come home, she lifted up her wings
I guess that this must be the place
I can't tell one from the other
Did I find you or you find me?
There was a time before we were born
If someone asks, this is where I'll be, where I'll be

Of course, they seem prescient until you look up the lyrics on Genius and realize that they mean absolutely nothing. David Byrne, the man himself, said that the lyrics of the song were constructed by stringing along a series of platitudes – basically it's a love song generated by Markov chain.

The song speaking the most to me at this moment means nothing, and I'm oddly ok with that.

Whenever I go to H-E-B, I have developed a tradition of listening to Talking Heads at max volume as I traverse the crowded roads of Austin.

For my international readership (those of you located outside of Texas), H-E-B refers to the South-Central Texas chain of grocery stores named after the esteemed Howard Edward Butt Sr. Headquartered in San Antonio, H-E-B has approximately 340 stores throughout our great state. H-E-B is so loved that it has its own subreddit.

If you want to keep reading in a non-disjointed fashion about the topic of this blog post, skip part one of the section about my grocery shopping habits. If you want to learn more about Austin's favorite grocery store chain, don't skip it, I guess.

Portrait of a Grocery Store Shopper as a Young Man, Part 1

As a fairly busy graduate student, I usually shop at H-E-B at least twice a month for grocery essentials. Since my week is usually so hectic, I prefer to shop on the weekends. Until this last weekend, I always shopped on Sunday nights. And the one thing you should know about shopping at H-E-B on a Sunday night is that it's an unmistakable shit-show. A semi-recent post to the /r/Austin subreddit entitled "What's your HEB [sic] pro tip?" garnered the following response:

Sundays aside, Texas love for H-E-B could not be overstated. Another response to the pro-tip thread led to the following string of comments: 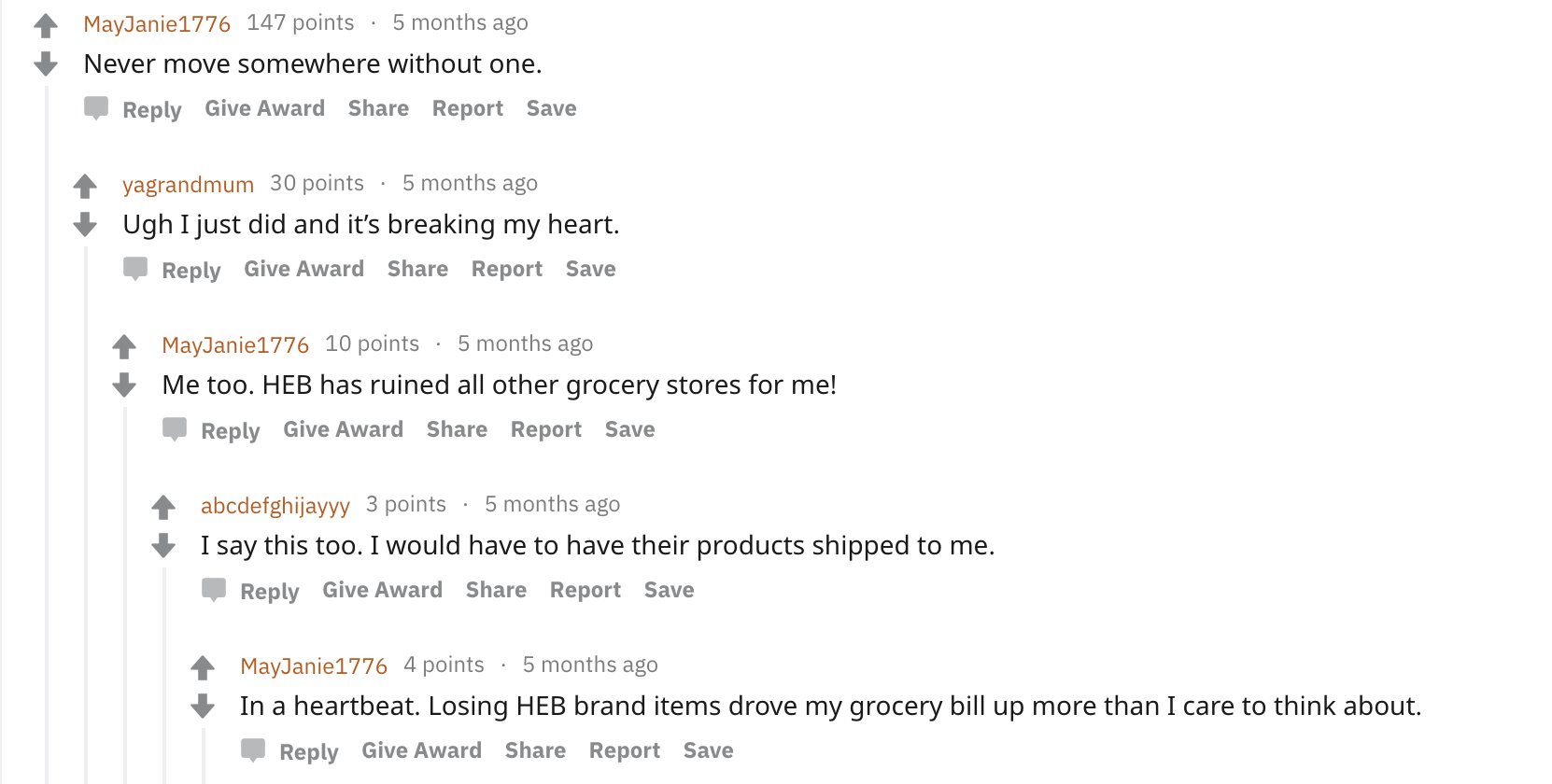 Although H-E-B is truly tangential to this blog post, I am fascinated by this home-grown Texas institution. Austin, like most areas, has a very limited number of grocery store chains and no other chain has nearly the same amount of mindshare that H-E-B has attained.

Portrait of a Grocery Store Shopper as a Young Man, Part 2

Yesterday, I decided to take the advice of reddit poster ericaworthyyy and switch up my H-E-B shopping habits. Instead of going on a Sunday, I braved the H-E-B aisles on a Friday night. Yes, not only was my Friday night marked by the completion of two loads of laundry, but also a trip to the supermarket.

Interestingly, this is only the second time I've been to the H-E-B for groceries since I arrived back in Austin on January 11. Usually I go to H-E-B every two weeks or so, but recently, I've been eating out more and stocking up on groceries in a piece-meal fashion at the Target near my work and Speedway Market, which is right across the street from my apartment. Real pro-tip, never live directly across from a bodega, unless you want to find yourself buying over-priced Ben & Jerry's at 1am on a school night (repeatedly).

This strategy of piece-meal grocery supplementation feels effective and it makes me feel like I am saving quite a bit of time. Nevertheless, I am certain that it's a horribly flawed strategy in terms of cost-effectiveness and I'm not even really sure it saves me any time. H-E-B is significantly cheaper than Speedway Market and it's only 15 minutes away.

Grocery shopping on a Friday night felt oddly adult. Unlike the Sunday crowd, which is cranky due to the impending workweek, desperate to leave, and packed in H-E-B like sardines, the Friday crowd is listless and unexcitable. Like, me, they don't have plans and they don't need plans. Friday night shoppers are too cool for plans. Why drink downtown, when you can drink up the blithe atmosphere of H-E-B on a Friday night?

At least that's how I intend to portray my Friday-night grocery shopping experience. Not as it truly happened – full of ceaseless internal monologue where I asked myself what I was doing with my life and what choices had led to this moment. Not like that at all.

In these moments, "Road To Nowhere" loops through my head. In my newly emancipated status as a bachelor's degree-holder, the combination of listlessness and acceptance coursing through "Road To Nowhere" is not only germane to my psychological state, but absolutely necessary:

Throughout my life, there has always been a next-step, a next graduation, a next eventuality. If nothing else, I could count on graduating from high school and then college. Once college ends, all of the sudden the world's dictates regarding the best course of action in my adult life are much hazier. Ultimately, the telos of post-college adulthood is non-existent (i.e., nowhere) – "Road To Nowhere" tells us that we can be certain of that.

Often in these H-E-Bbian moments (not to be confused with Hebbian moments), during which my internal monologue is entirely composed of rhetorical questions and few rhetorical answers, I turn again to the music of Talking Heads.

Although I am convinced that David Byrne was little more than a human form attached to a stochastic lyrical generator, these lyrics give me comfort. The lyrical content of Byrne's songwriting may border on the absurd, but that doesn't mean that the corpus as a whole is meaningless.

I will most likely discuss this concept in a future blog post, but I have been thinking quite a bit about Kant's notion of "free play" as it relates to the philosophy of art. Under my limited understanding of Kant's Critique of Judgement, art results from the process of asking questions, not answering them. As with the music of Talking Heads, it's almost as though – when things stop making sense – that's when the real work begins.